Musicians in Tune with Judges at the Oswestry Youth Music Festival 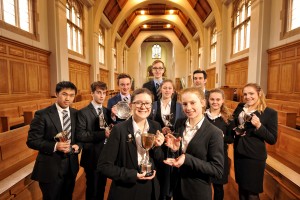 Ellesmere College was the best-represented school at the recent Oswestry Youth Music Festival and students enjoyed success across the board.

Talented musicians from the school came away with 23 top three places as they competed against 300 participants in 75 different classes from piano, woodwind, brass and strings to vocal classes.

The Oswestry Youth Music Festival, which celebrated its 40th anniversary this year, welcomed an increased number of entrees as well as former winners, who performed in this year's charity concert.

The Chapel Choir were successful in the Youth under 21 category and the Senior Orchestra won The High Sheriffs Award for their performance of Mussorgsky's "Pictures at an exhibition".

Pupils were also successful in both Woodwind categories. The Quartet were triumphant in the Chamber Music 18 and under group, before the Ensemble secured the 21 and under 'Kath Bates Memorial' Trophy, for their performance of Queens classic anthem "Bohemian Rhapsody".

Tony Coupe, Director of Music, said, "I am so proud of all our outstanding achievements at the Youth Music Festival. As individuals and as ensembles they rose to the occasion ensuring great success across the board. I intend to build on from this success through the development of a musical culture at the school that is focused on passion, enjoyment and hard work".