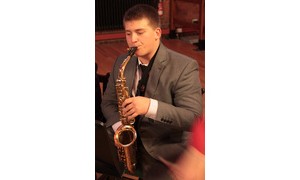 As the Ellesmere College community tries to come to terms with last Thursday’s tragic death of a Sixth Form student, floral tributes continue to arrive at the School.

A promising musician and keen sportsman who started at the School in Year 4, aged 8, Matthew Dewhirst’s presence in both the Upper Sixth Form and the School as a whole will be deeply missed.

James Baggaley. Matthew’s Sixth Form Housemaster commented: “Matthew was definitely one of the good guys. He had a kind heart and was a very well respected young man. He had many friends with whom he shared his love of music and sport. The whole House is deeply saddened by the loss of such a true gentleman.”

As an A-level student, Matthew contributed significantly to the musical life of the School. Matthew was a Music Exhibition holder and played the saxophone, clarinet, piano and classical guitar and was a member of the Senior School’s Orchestra and student band.

During his time at the School, Matthew also sang in both the Lower School and then Senior School Chapel Choir, most recently travelling to Westminster Abbey last November to sing in a Service of Celebration for the Life of Nathaniel Woodard, the founder of the Woodard Schools’ group.

Matthew represented the School at all levels on the playing fields, in Cricket, Football and his beloved Rugby. He was a member of the School’s 1st team Rugby squad and played for Whitchurch RFU. He had also represented Shropshire in Rugby and was a former Junior Footballer of the Year for the South Cheshire League.

Brendan Wignall, Headmaster added: “It is always very sad when the life of a young person comes to an unexpected end. Matthew was a fine young man who was always positive, cheerful, kind and considerate: he was always willing to ‘have a go’, and we were privileged to have him as a member of our community. Everyone at the College has been devastated by his loss and we extend every condolence to Mr and Mrs Dewhirst.”

The serene confines of the School’s Chapel has become the focal point for Matthew’s friends and their families to seek comfort from each other at this sad time. Matthew's funeral is to be held in the Chapel at Ellesmere College, on Wednesday 1st August, at 2pm, and an invitation is extended by Mr and Mrs Dewhirst to everyone who knew him over his 17 years of very active life. Dress code is smart but not black.