Mariella Heads for the Limelight! 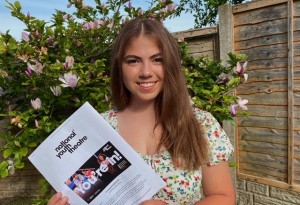 A Drama and Music Scholar at Ellesmere College is living her dream after being accepted by both the National Youth Theatre and the British Youth Musical Theatre companies.

Acceptance to the National Youth Theatre (NYT) opens the door for Year 12 student Mariella Steele, 17, to the possibility of performing in London's West End, the Edinburgh Fringe Festival and on the company's continental tours.

The British Youth Musical Theatre (BYMT) place will see Mariella appear in an innovative all-female production of Cabaret Macabre in Plymouth later this year - depending on the Coved-19 situation. Both theatre companies are difficult to get into as competition for places is tough and standards are extremely high.

"I have auditioned for the NYT for the last three years - so you might say it's third time lucky," said Mariella, who attends Ellesmere College in Shropshire and lives in Much Wenlock. "I did my first audition at 15, and this made me realise that there is a lot of competition and it's difficult to be offered a place. Some people have had several attempts to get in and many never make it at all.

"My first reaction when I found out was relief, as it had weighed on my mind and I had wanted it so much over the last three years. Later that same day I took a Zoom call and that made me feel part of something really big.

"I'm really excited about it but disappointed that the three-week course due to take place in London won't be happening as planned because of the Covid-19 epidemic. There will be a week's Zoom course which I will be 'attending' and hopefully the physical course will go ahead later.

"The NYT put on productions in the West End, at Edinburgh Fringe and on continental tours, offering great opportunities - it's all very exciting.

"Being accepted by the BYMT is also a great honour and I'm hoping Cabaret Macabre will be able to go ahead as planned in Plymouth later in the year. It's a creative new show with an all-female cast and is being staged as part of Mayflower 400 - celebrations marking the 400th anniversary of the Mayflower's historic voyage to the New World."

Mariella's mother, Sue, said: "We are extremely proud of Mariella and so pleased with her achievements in these difficult times. We would also like to thank the staff at Ellesmere College for all their help with Mariella's drama and music at the school.

It's an amazing double celebration as Mariella has been accepted by the NYT and the BYMT- both tremendous results."

Rachel Schubert, Director of Drama at Ellesmere College, said: "This is fantastic news. I am delighted for Mariella and know there will be exciting times ahead in relation to both NYT and BYMT.

"Both are very difficult to get into and competition for places is very high, Mariella has done very well indeed - she should be very proud of herself."