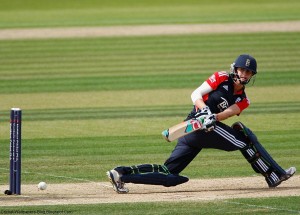 An ex-England cricket player will be joining the successful girls cricket development programme at Ellesmere College for the summer term in 2019.

The 'Cricket for Girls - Lydia Greenway' Cricket Initiative will be based at Ellesmere College to develop and grow girls cricket from March onwards. It will be led by Lydia Greenway herself, who appeared for England in seven Tests and 32 ODI's during her 13 year career. The middle-order batter scored 4,108 runs in international cricket and is regarded as one of the best fielders in the game, taking 121 catches. She continues to play for Southern Vipers and her home county of Kent.

Gareth Owen, Director of the Cricket Academy at Ellesmere College, said confirming the college has been accepted as a hub for the Cricket for Girls initiative was brilliant news - just after they were named in the Top 100 Schools for Cricket for 2019 by a leading cricket magazine, The Cricketer.

He said: "Being recognised as a hub for cricket - and specifically girls cricket - is a tremendous honour and recognises the hard work of coaches and pupils to develop the sport in the school as well as providing a pathway into the professional game. The College has a strong cricket tradition with players representing Lancashire, Warwickshire and Glamorgan academies, and a number of accomplished Sixth Formers have achieved places at the six MCC universities academies."

"Ellesmere College also has strong links with Shropshire, Cheshire and Staffordshire county cricket programmes and we are working hard to develop our role as a community hub for local cricket - developing and coaching girls and boys. a great example is Georgia Munroe who is very much part of the player development programme presently playing school, club and County cricket alongside her academic commitments and playing other sports."

The 'Cricket for Girls' initiative, which Lydia launched in 2017, is aimed at coaching females of all abilities and ages. This announcement follows the success of female athletes at Ellesmere College in a variety of other sports. 17-year-old Freya Anderson, who swims with the college team Ellesmere Titans, recently brought home two gold and two bronze medals from the European Championships in Glasgow and medals at the Commonwealth Games in Australia. Student Katy Leeming is a Team GB shooter, Wrexham based Aditi Chezhian plays U14 tennis for Wales, and Oswestry-born 18-year-old twins Caro and Lottie Hulme play hockey for Wales. For more information on Cricket at Ellesmere College please visit: Sport At Ellesmere