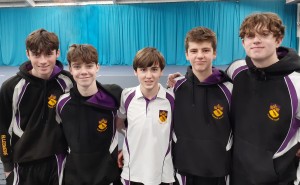 Late in the Autumn term, the Year 10 boys tennis team played in the Regional Finals of the LTA National Schools Competition in Tipton after winning their county section back in the summer.

The boys performed exceptionally well, beating the No. 2 seeds (King Edward's Camp School, Warwick) in the semi-final 5-1, and then went on to beat the No. 1 seeds (Magdalen College School, Oxford) in the final 6-0.

As a result, the team have now reached the UK's top four and will play in the National Finals in Bolton against the winners of the Southwest (Millfield - Somerset), the Southeast (Reeds - Surrey) and the North (Merchiston - Edinburgh) in December.

The team comprises of Peter Swinnerton, Jacob Popplewell, Matt Harris, Harry Fenton and Guy Welti, all of whom are members of the Tennis Academy at Ellesmere College. Each week, they have the opportunity to attend six hours of squad training, two strength and conditioning sessions, plus as many hours of individual coaching and match practice that can be scheduled into their academic timetable.

Stephen Welti, the Senior Performance Coach and Director of Tennis at Ellesmere's Tennis Academy, said: "These competitions are tough and players need to be at the top of their game each time they perform. The players have worked hard in their training sessions and have achieved some great results throughout the year. I am very proud of them all." He added, "Last year, the Yr. 8 Girls Team reached the National Final of the same event, leaving the boys with a lot to prove this year. However, they have lived up to their promise and will travel to Bolton Arena with their heads held high".

The future looks bright with four of the five players young enough to compete in this event again next year. Harry Fenton, the Captain, is the only player not to be eligible next year. "I can't wait to play at Bolton against the best Schools in the UK," he said. "On paper we shouldn't win the event as our ratings are lower than the other teams, but that hasn't stopped us so far."