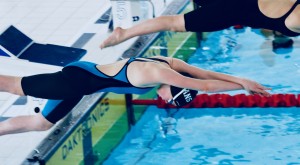 A record number of young swimmers took time out from their exams to gather at Thomas Telford School to compete in this year's Shropshire Secondary Schools Swimming Championships.

Cheered on by a packed gallery, 26 different schools came together to contest this year's championships and representing Ellesmere were a team of 9 exceptional swimmers from Lower School.

All 9 of the Lower School swimmers are part of the elite Ellesmere College Titans Swimming Academy and even though they went without any of their intermediate or senior team mates, they excelled on the night.

In a highly competitive meet, the young Ellesmere College team dominated the Junior Category to such an extent that they topped the overall medal table.

The Ellesmere girls swam brilliantly and went unbeaten in all of their five events. Not to be outdone, the Ellesmere boys also won two of their events to take their team's combined haul of gold medals on then night to 7.

Commenting on the performance of the swimmers, Age Development Coach, Danny Proffitt, said, "The swimmers all performed really well despite having competed in Regional Championships and National Qualifying Meets for three weekends on the trot. I was particularly pleased for Ollie Covill who gave a standout pair of performances having literally just come back from illness."

Congratulations to Hettie D'Ammassa (2), Katie Hale (2), Oliver Covill (2) and Evie Floate who all became 2018 Schools Champions. Also, well done to Hettie for setting a new record in the 100 Fly!