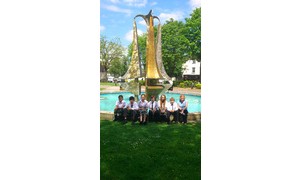 A group of Lower School pupils have won the initial stage of the Institute of Engineering and Technology 2012 Faraday Challenge which attracted teams from nearly 350 schools across the Country.

The Faraday Challenge is a unique opportunity for students to design and make a prototype solution to an engineering problem which this year was linked directly to the London 2012 Olympic and Paralympic Games.

Head of Physics, Amy Darrant, explained, ‘The Faraday Challenge focuses on science, technology, engineering and mathematics (STEM) skills. This year the task was to design a machine which dispensed a specified  amount of water, at the right time and move a  container into an accessible position for an athlete to collect at a water station’.

Participating in the School's winning team were Georgina Freer-Carmichael, Isabel Ward, Chelsea Watson, Danny Leung, Tomos Otter and Ben Palmer. They achieved joint top position and as one of the top 3 schools the pupils have won a trip to London to compete in the national finals at the end of June.

Amy Darrant added, ‘I was so impressed with the independence that the students showed. The work is completely their own and there was no teacher input at all. We are delighted to be through to the finals and excited to see what more our gifted and talented students can produce’.