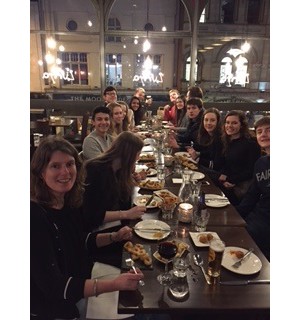 Fourteen GCSE, A Level and IB students of Spanish travelled to the Royal Exchange Theatre in Manchester, to see a performance of Federico García Lorca's haunting play, The House of Bernarda Alba.

Performed in Sign Language alongside audio descriptions, students followed the efforts of a controlling mother, Bernarda Alba, struggling to exert influence over her five rebellious daughters. Spanish A Level student Edward Bellis said: "I was lucky enough to participate in this trip and to see this play, the last work of the Spanish playwright who died in 1936 during the Spanish Civil War, performed by such an utterly talented contemporary cast".

It was certainly a tense and sometimes dark comedy and students were spellbound by some of Bernarda's actions. Students enjoyed widening their appreciation of the Spanish culture and seeing this performance recommended by our Spanish department. Meanwhile, further cross-curricular and cultural events for the enjoyment of linguists of all ages are being planned by the MFL department.