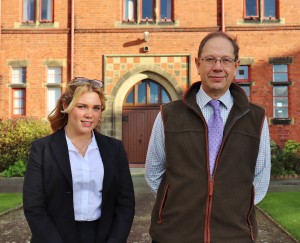 Ellesmere College has unveiled the latest recipient of their scholarship to honour Ellesmere born founder of the Save the Children charity, Eglantyne Jebb.

Abi-Lou Foster, from Market Drayton, won the Jebb Scholarship after demonstrating 'selfless support' to her community through volunteering and a range of fundraising activities over the last seven years.

The scholarship, which will support Abi-Lou through her two years of A Levels in Sixth Form at Ellesmere College, honours Eglantyne Jebb who launched Save the Children with her sister, Dorothy Buxton, at the end of World War l. The charity now supports children in more than 100 countries.

Abi-Lou said of her charity work and the Scholarship: "Being kind, caring and helpful are values which have always been important to me. There are very few people who are aware of the personal commitment which I make to charity work and volunteering. Ellesmere College noted this this on my application to Sixth Form and because of it I was offered and awarded the Jebb Scholarship; for this I am incredibly grateful."

She has raised money for the Alzheimer's Society, the NSPCC, her local swimming club, The Little Princess Trust, the National Autistic Society, Save the Children, Shrewsbury Ark and has taken a leading role in the Operation Shoebox Appeal.

Abi-Lou also started raising money for a trip to Borneo to volunteer at the Orangutan Orphanage and Sun Bear Conservation Centre and beach clean ups but, unfortunately, due to Covid this was unable to take place and subsequently the money raised was sent to the World Wildlife Fund.

Future intended ventures include undertaking a lifeguarding course and performing a sponsored skydive.

Josh Millington, from Ellesmere, was the first recipient of the Jebb Scholarship in 2020. He has now successfully completed his A Levels and has moved on to university.

Richard Jebb, Eglantyne's great, great nephew said: "Abi-Lou is the second recipient of the Jebb Scholarship and a worthy winner.

"She has consistently shown a commitment to helping others over a period of several years and it is fitting that those efforts should be recognised in this way.

"Her fundraising activities have been imaginative and raised a lot of money to help a range of charitable organisations.

"Abi-Lou also has an enviable record when it comes to volunteering - emphasising her ongoing selfless support to the community, which is what the Jebb Scholarship is all about.

"The 'Save the Children' charity founded by my great great aunt and her sister was built around the principles of helping others, including within our own community, so I feel sure they would be delighted with the choice of Abi-Lou as the latest Jebb Scholarship recipient."