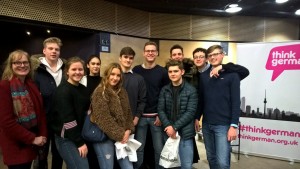 Eleven Ellesmere College lower sixth linguists with ambitions to work for global businesses recently attended an International Careers Fair organised and hosted by the London School of Economics and Political Science (LSE), the German-British Chamber of Industry and Commerce, and the German Embassy.

Students had the chance to meet representatives from British and German companies to discuss the importance of linguistic skills in global job opportunities. The group of sixth formers had prepared rigorously, drafting their own CVs and thinking about their own employability skills.

Year 13 student, Sean Allen, currently studying Politics, Economics and Business Studies, said, 'I hope to study Politics and International Relations at university, as well as picking up a new language such as German, and chatting to representatives from the LSE student societies solidified my ambition. The event highlighted to me how valuable language skills are in politics and how much student societies can contribute to an undergraduate degree.'

Fellow participant Iwo Hachulski, a Year 12 International Baccalaureate (IB) student - fluent in four languages - added, 'I had the opportunity to ask representatives from the largest European industrial manufacturing company what employability skills are most important to them, and to find out about global job prospects. I plan to follow this up with further research online.'

In addition to attending the event, students enjoyed a tour around the London School of Economics, a multilingual lunch, a walk through historic Bloomsbury and some free time on festively decorated Oxford Street. Head of Modern Foreign Languages Christina Westwood, who organised this trip, said, 'Language skills and cultural awareness are highly valued by major European employers, so we were keen to try this event. As several of our Sixth Formers are considering London-based universities, it was a day well-spent in the capital city.'

For more information about our MFL programme please Click Here.