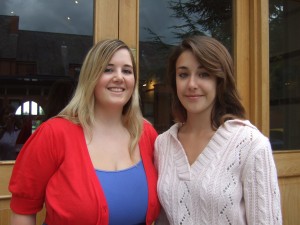 Top performers included Yasmin Rhabari and Hendrick Scheer who scored 38 points, equivalent to just over 5 grade As at A level. Catherine Wignall, from Ellesmere, scored 35 points, just under 5 grade As equivalent at A level. Yasmin, Hendrick and Catherine all scored an exceptional grade 7 in particular subjects (grade 7 indicates a level significantly beyond the highest standard of A level) in Economics, Geography and History respectively.  Hannah Phillips from Ellesmere scored 32 points, which equates to just under 4 grade As at A level.

Of the 29 candidates sitting the International Baccalaureate Diploma 20 achieved the equivalent of at least 3 grade As at A level.

The Headmaster of Ellesmere College, Mr Brendan Wignall, commented: "I am delighted with these results. The IB is a demanding but rewarding course, and while it is certainly not appropriate for everyone it is a fantastic preparation for university, and the fact that IB students study 6 subjects, write an extended essay, follow a course in the Theory of Knowledge and are assessed on their extra-curricular commitment means that they really have a very full education, to provide them with something which will last for the rest of their lives, rather than just getting them into university."