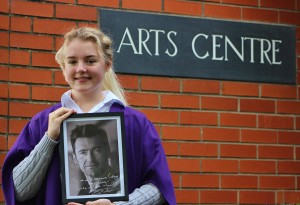 Internationally renowned actor - Hugh Jackman - best known for his roles as Wolverine in the 'X-Men' film franchise and P.T. Barnum in 'The Greatest Showman' - has gifted the Ellesmere College Arts Centre with a signed photograph and message of good wishes to everybody working and studying in the Department.

In 1998, Hugh Jackman played the lead role of 'Curly' in the Royal National Theatre's production of 'Oklahoma!' - a performance which gave him his international break and an Olivier Award for 'Best Actor in a Musical.'

Earlier this year, he arranged an 'Oklahoma!' reunion where the original cast accompanied him onstage during the first half of his O2 Arena Tour. Howard Ellis, who recently performed in the Brightman & Bocelli tribute concert here at Ellesmere College, played the role of Joe in the production and understudied Hugh in his role as Curly, and was invited to join Hugh on his tour.

During rehearsals, Howard would often find himself discussing the excellent work being done at the Ellesmere College Arts Centre with Hugh, and this led to Hugh very kindly writing a message of good wishes to the Department.

Director of Drama, Rachel Schubert, said: "We are all huge fans of Hugh's work here at the Arts Centre, and we are so incredibly proud and grateful that he has taken the time to send his best wishes. It is wonderful that we are able to display his support for the Arts here at Ellesmere College."