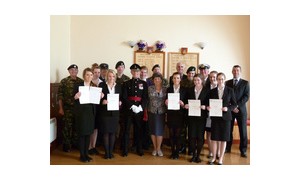 The High Sheriff of Shropshire, Mr. John Abrams, visited the School recently to present Bronze and Silver awards to a group of pupils.

The visit by Mr. Abrams and his wife began with a tour of the School with Prefects, Vicky Von Hoven and Julian Sole and fellow Gold Awardees, Nia Squirrel and Thomas Watkin.

The team of staff who support the Duke of Edinburgh Award programme at the School, were present at this year’s ceremony although a total of 35 pupils from Years 10 to 12 have recently gained their Silver and Bronze awards, many found themselves in examinations and will be presented with their awards by the Headmaster in a forthcoming Assembly.

In Year 11 there are still a group of pupils who are still to complete the criteria to gain their Silver award, but for 1 pupil, it was a particularly special occasion since she received both Bronze and Silver Awards from the High Sherriff. Year 11 student, Amelia Morris, alongside a number of her peer group, will begin to work towards her Gold award in September as she enters the School’s Sixth From.

Dr. Tom Gareh, Duke of Edinburgh Coordinator at the School commented, ‘The School  has run the programme for 55 years. During this time over 1,000 young people have left school having achieved a Duke of Edinburgh award. We encourage all our Silver awardees to complete their Gold award, since, as the High Sheriff commented in his speech to the pupils, this will present them with many opportunities as well as making them far more attractive to employers in the future.’