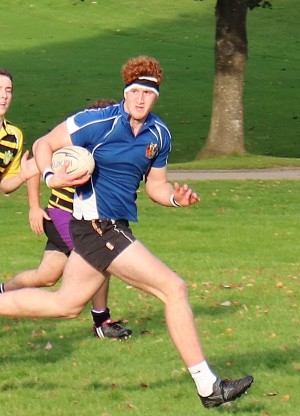 Harvey Cuckson, Yr 12, has been selected to play for English Rugby Under 18s squad and will now to go on to play international fixtures for this age group, with a view to progressing to the senior level.

He's been playing for Worcester Warriors for four years and is delighted to be named in the final England squad after a lot of hard work. He said: "I am really pleased. This is something I have always aimed for and I am so pleased I have made the cut. I have had a few injuries and there has been a lot of disruption throughout the Coronavirus pandemic, as you would expect, but all my practice has paid off. There is a lot of work to do now though and I am looking forward to getting stuck in to playing with and learning from the best of the best."

Harvey has been involved in various England training camps since Christmas. The camps were made up of over 90 players from the English Premiership academies and numbers were gradually whittled down.

Alex Murphy, Director of Rugby at Ellesmere College, said he is incredibly proud that Harvey has made the final squad.

"This selection is the result of a lot of hard work and focus," he said. "He is part of talented cohort of players at Ellesmere in the Rugby Academy that have displayed an exemplary attitude towards training and personal development while their domestic rugby season has been severely disrupted. Harvey has embraced the training opportunities that have been available to him while at Ellesmere College. For the past four years Harvey has been making the trip to Worcester Warriors academy training every week which is obviously very time consuming on top of his academic studies. He has displayed great resilience in overcoming a number of difficult injuries last year while also persevering with his own training while Coronavirus put a stop to rugby across the country."

"It's fantastic that Ellesmere has been able to produce another school boy international and is a testament to the rich rugby traditions here at the College. His selection continues to keep us on the representative rugby map."