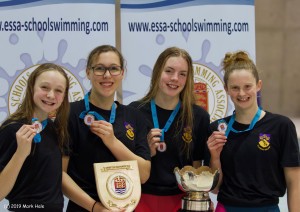 The four Titans qualified for the freestyle and medley relay events, and started the day with their freestyle. A fast race saw them win their heat to qualify for the final with the third fastest time of the qualifying session.

The St Aidens girl's hopes of an early medal were dashed though as they were held off by Devonport High and squeezed into fourth place by an agonising 0.11 seconds. But the four girls were not deterred, and quickly refocused to compete in the final of the medley relay.

Seeded first for the medley following the regional qualifying rounds, a confident qualifying swim saw them win their heat with the fastest time of the three heats to take their place in lane four of the final.

A brilliant backstroke leg by Evie, followed by Emily's excellent breaststroke leg put Ellesmere a short head in front at the halfway stage of the final. Then Hettie extended the lead to 0.37 seconds with a slick butterfly leg, before Katie flew in the freestyle to hold off a spirited challenge from Sheffield High to finish strongly with 0.91 seconds to spare.

This is the first time that Ellesmere's name has appeared on the Leicester Bowl, where the winners stretch back to 1969.

Coach Marc Foster, head of age group swimming at Ellesmere College Titans, said he is very pleased of the group's effort. "The girls are excellent individual competitors and have been training hard," he said. "Becoming national schools champions will hopefully encourage them to now work even harder in the lead up to next year's British nationals."

For more on swimming at Ellesmere visit: Ellesmere College Titans