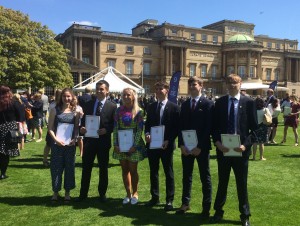 Former Sixth Form students from the College were among 3,000 people from across the country who received their awards during a day that will be treasured by all those who attended for many years to come. In total, Ellesmere College has 24 recipients of the Gold DofE award this year including a number of current students who have deferred receiving their awards as they focus on their exams and will receive them later in the year.

The awards were presented to the group by Sean Rose, a skiing Paralympic World Champion after giving an inspirational speech to the group. Following this , the group had the opportunity for a brief 5 minute Q&A with the Duke of Gloucester about their experiences in the DofE.

Ellesmere College is the largest single contributor in Shropshire to the DofE scheme as every student has the opportunity to go through it as part of their co-curricular activities - directly or via the CCF (Combined Cadet Force) - Army, Navy or RAF, to encourage the development of key life skills, leadership, team building, confidence and independence.

Jim Underhill, Gold Duke of Edinburgh Leader at Ellesmere College commented on the awards: "This was a wonderful day for all our students who took part in the scheme and obtained the Gold Award - it was an experience to enjoy and will live with those who took part for the rest of their lives. We are immensely proud of the achievements of all our gold award winners. They work hard to ensure they complete their academic studies but the DofE Award adds another set of life skills to help them in their future careers."

Headmaster of Ellesmere College, Brendan Wignall, said: "The scheme is an asset to the growth and development of our young people across the country. Taking part strengthens character and provides a unique perspective and insight for those involved. It is amazing to think that this scheme helps to prepare nearly half a million young people for life and work across the country every year, we value it very highly here at Ellesmere College."

Since it was launched, about six million people have taken part in the Duke of Edinburgh scheme and nearly three million awards have been presented. The scheme was launched by the Duke of Edinburgh in 1956 and has grown to the point today where it is taken up by more than 10,000 institutions nationally each year, including schools, prisons and youth clubs. It enjoys the support of more than 3,000 partner organisations and some 40,000 adult volunteers.