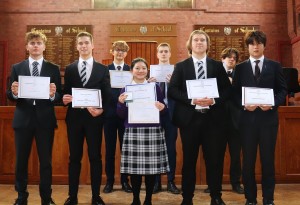 Senior School mathematicians at Ellesmere College have once again been celebrating a fabulous set of results with one of the highest scores ever recorded in the UKMT Senior Maths Challenge - held on Tuesday 4th October.

Students sat the Challenge in early October and have only just received their results along with the rest of the UK students who took part. Ellesmere is always a keen participant in the country-wide challenges along with the Maths Kangaroo and Olympiad Challenges too.

The results this year once again demonstrated the level of commitment and excellence in maths at the school with the most outstanding achievement by Year 10 student Natt Kritchanarat who scored 99 and won not only a Gold, but Best In School!

Natt was also successful in the UKMT Intermediate Maths Challenge Cayley Olympiad in the Summer Term, and a medal and book prize were also presented during assembly and her certificate of Distinction.  This is an amazing achievement by Natt who is worthy of praise for her independent study, enquiring nature and hard-work. 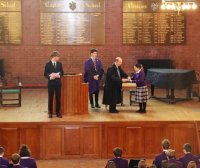 Natt and Lukasz also qualified to compete in the follow-on round, the UKMT Senior Kangaroo Maths Challenge, which took place on 16th November - results due soon!

Well done everyone for taking part and  below is the complete list of Awards.