Girls U16 Success in the National Hockey Cup 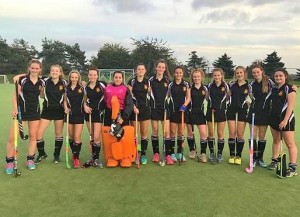 Girls hockey at Ellesmere College is reaping the benefits of the High Performance Hockey programme with continuing success in matches through the Autumn season.

The High Performance Hockey Programme focuses on and nurtures each of the four key areas of the individual players development leading to a higher performance in play:

Sessions are run as 1:1 or 1:3 groups and include player analysis, mentoring, profiling, team play, physiotherapy and strength & conditioning.

Success in the National Hockey Cup

Thursday afternoon saw the U16 team take on Trent College in the third round (final 24) of the National Hockey Cup. Ellesmere scored first through Camilla Broster just 50 seconds into the first half. Once ahead, Ellesmere kept the pressure on for much of the first half, but a lapse of concentration in the 33rd minute allowed Trent to equalise from a well worked long corner set piece. 1-1 at half time.

In the second half Trent came out firing and had a number of chances, all swatted away by goal keeper Alanah O'Brien. In the middle of the second half Trent were awarded a penalty flick after some brave defending by Kezzie Hutchings, who prevented a clear goal being scored when the ball hit her in the body on the line. Alanah who was playing out of her skin, saved the penalty flick and the score remained 1-1 at full time.

Five penalty flicks were used to decide the outcome of the game. George Dawson, Alice Parton, Ellen Dawson, Millie Forster and Kezzie Hutchings, all stepped up. Flicks ended 4-4, and so sudden death penalty flicks ensued. Trent took the first flick and Alanah saved it! George Dawson steps up and buries the ball into the back of the net. Ellesmere win 6-5.

They now progress through to the final 12 of the cup - last 4 in the North of England.

An unbelievable result and if they continue to perform in this fashion, they certainly have a chance of going even further.