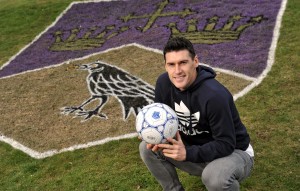 Gareth Barry may be just 14 appearances away from equaling Ryan Giggs' Premier League record but he took time out this week to visit Ellesmere College. The Patron of the schools new football academy, Barry joined up with the elite football coaches for an afternoon session with current Ellesmere players.

The former England international has turned out a staggering 618 times in the top-flight during a career that has included spells with Aston Villa, Manchester City and, for the last three years, Everton Football Club.

Ellesmere College will begin its new football academy this September with Edukick Manchester. The academy will be a programme for young players who have aspirations to play football at a high level or work in the football industry but also appreciate the importance of their education.

The Programme will deliver professional academy standard football coaching alongside subject-based qualifications including GCSEs, BTEC Diploma in Sport, A Levels or the International Baccalaureate.

Vastly experienced, Barry is a Premier League winner and arrived on Merseyside with over 50 England caps and having captained his country.

Born in Hastings, he was part of Brighton's youth set-up before switching to Aston Villa and making his senior debut in central defence aged just 17. Named Villa's Player of the Season in 2006/07, Barry's performances were beginning to catch the eye of the country's biggest clubs. After interest from Liverpool in 2008, he eventually joined Manchester City for £12million in 2009, becoming a regular straight away. Barry joined an elite club in surpassing 600 Premier League appearances during his current spell at Goodison Park.

Barry said "The school here have done a fantastic thing and agreed a coaching deal with some top coaches that allow the lads here to get some proper training as well as focus on their school work which is important too, it's a fantastic set-up".

Ellesmere College will be supported by Edukick Manchester, who employs full-time UEFA qualified coaches and bring its 10-year pedigree of player development to the programme. EduKick will also provide a number of global connections within the football community, including academies in Brazil, USA, Mexico and Europe. In addition to a robust academic timetable, students will participate in at least 12 hours of football coaching per week.

Barry's appearance at the school follows ex-premiership footballer Jon Macken, who coaches with EduKick Manchester. Macken who once cost a whopping £5 million when he joined Manchester City said, "We are trying to help our young players form a strong idea of where they want to go in football, everything we do is designed to improve our young players technical ability and understanding".

Each player will receive an Individual player plan to develop fitness, strength and conditioning, physiotherapy, nutrition and dietary advice, along with the opportunity to enjoy international tours, games against professional clubs, and visits to top sports universities. Players will also have the opportunity to attend football trials endorsed by the Professional Football Scouts Association (PFSA).

Headmaster Brendan Wignall explains "Football is clearly the most played and popular sport in the world, and whilst always remaining committed to the wide range of sports offered at Ellesmere, it seems logical to launch our new Football Academy. We are an 'Athlete Friendly Education Centre', an accolade awarded by the International Baccalaureate Diploma, and Edukick have over ten years' experience in international coaching. We are delighted that Gareth Barry, a parent at Ellesmere, has agreed to be our Patron and our expectation is that we will soon be seeing Ellesmere College students in Premiere League academies and clubs. Equally, we recognise that only the very best will make it as professional footballers, therefore there are pathways into the business elements of football within the Academy training at Ellesmere."