International Admissions
< Previous  |  Next >
Home   >   News   >  From Ellesmere to the USA: Football Success for Saranga

From Ellesmere to the USA: Football Success for Saranga 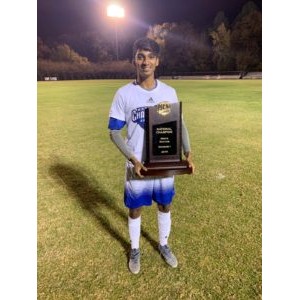 It's been a hat-trick of a year for Ellesmere College student Sarangapany Pagadala as he gained a fabulous set of A Level results in Maths, Economics and Business, and achieved a scholarship to a university in the USA.

Saranga joined the Ellesmere College Football Academy in 2017 with IH Manchester (IHM), moving from his home country of India, to pursue his dream and has always shown his commitment to be one of the best players - working hard every day to develop his skills. He has always clearly understood that his coaches' feedback plus what he learnt from his teammates, was making him a better player.

During his time at IHM Saranga won a number of awards for his performance and effort. He was awarded "Player of the Month" as well as an end of season award. In short, he was a key member of the squad for two years.

Whilst with IHM, Saranga attended a trial day with "Soccer Assist" - an organisation dedicated to providing players opportunities to study and play soccer for a US college or university whilst receiving a scholarship. This particularly suited Saranga, being both a good A-level student and committed to his football. After working with Tyrelle from "Soccer Assist" he soon received a number of offers from good US universities.

Saranga has just finished his first semester with Monroe College and has had a really successful start to his time in the USA. With 36 players on the roster at the college, Saranga has featured in the first team and was one of the 24 squad members selected to travel to Tyler in Texas for the NJCAA National Championship Tournament. With a fantastic unbeaten record, Saranga and his team brought home the title for Monroe College for the first time in the team's history, a fantastic achievement.

Everyone at IHM and Ellesmere College wishes Saranga well for the next semester, when he will be returning to Monroe College to continue his winning ways. He will then possibly look to transfer in the new term for further football experience and development.

Saranga has always been ambitious and hardworking, and had a clear goals set out and a clear work ethic that has helped him achieve how he has so far today. This can be seen in his first interviews at Ellesmere and the awards he has won consistently through his two years.

Mick Brennan, IHM Director of football said, "This is just a fantastic success story for Saranga. He was always one of the stand out players on the IHM Ellesmere programme with his determination, drive and commitment. He was one of those players that just knew he could achieve, and as a coach you just want to help a player with drive and attitude like that as much as you can. I'm delighted with he's made; it was a tough move to go to the US and I know from talking with him right at the start it wasn't always easy. However, Saranga has the commitment to push on through and work hard. Winning the Championship is something he will always remember and something that he really deserves. He's a shining example of how having the right attitude drive and commitment, as well as skills can take a player a long way."