French Language Immersion trip to Ebblinghem on the Opal Coast 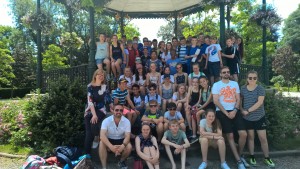 Forty-eight young linguists from Years 7 and 8, accompanied by five members of staff, recently enjoyed a French language immersion trip to Ebblinghem on the Opal Coast. It proved to be an action-packed three days.

Included on the trip was a visit to the Nausicáa centre and to a sweets factory in Boulogne; some time spent on the beach; a look around the Belgian town of Ypres; and - the highlight of the trip - a visit to the College Desrousseaux in Armentières. While at the College Desrousseaux our pupils joined in activities with their French peers and also attended a biology lesson with a difference, organised by local science teacher, Laurent Cajetan.

After their return, Year 7 pupil Guy Welti said: "I enjoyed every aspect of our trip but particularly the visit to the French school where a pupil called Clotaire and his class made me feel very welcome. We were able to practise the French we've learnt already whilst having lots of fun."

Now into its fourth anniversary, the Ebblinghem trip is always very popular and will be back in 2019. Next year budding linguists will have the chance to try out their Spanish during a trip to Madrid.