Former student takes a birds eye view of our facilities. 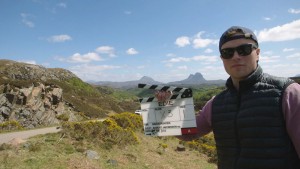 Old Ellesmerian Ali Miller has certainly been hitting the heights after setting up his own business. Ali, who has set up a drone business recently came back to Ellesmere to demonstrate his flying acumen and was able to produce a great video for the College, showing its sporting facilities and the beautiful countryside the college is set in.

OE Ali has recently been involved with contributing footage shot among the Scottish mountain range for a soon to be released film, Edie, starring Sheila Hancock and Kevin Guthrie.

He was on location in Lochinver in the Scottish Highlands for four weeks.

His work included precarious climbs and battling with extreme weather conditions to produce the footage required by the film's director, Simon Hunter.

"I feel so lucky to have been involved with a film of this quality and prestige, and to work with an accomplished director like Simon Hunter.

Also a link to the trailer: