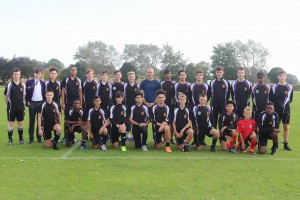 Ellesmere College Football Academy welcomed former Liverpool player and current Warrington Town centre half David Raven to the academy for the afternoon to share his experiences and knowledge with the players.

David came to the academy at Ellesmere College for the afternoon, spending the first hour of the session talking about his time in the game and taking questions from the players. He talked with passion about how he developed over the years - from school boy to Liverpool FC - his love for the game, the ups and downs, and how he managed to keep focused on his own goals in the game.

The Academy students then took the opportunity to test him with some great questions and on the finishing question, when asked what one bit of advice would he give the players, David said, "It starts now! If you really want to be a player and you have the drive, determination and ability to do it, you can, but it starts now. Every day you give 100%, every day you look at doing more, every day you think and act like you are a professional player. Only that way can you make it. The ladder to being a professional player is hard to get on, but once you are on it, it's even harder to stay on it, so you have to work at it. Never let anyone say you can't, if you get the knock downs, get back up and keep going. Football is up and down, there will be lots of downs, and the downs can be very hard, but think of the up days, the highs of the game, the love you have for it, and that will keep you going. It starts now!!"

Following the Q&A David delivered a fantastic session for the players out on the field, coaching them through the training sessions he is involved in each day and passing on his knowledge of the game.

Mick Brennan, Director of the Academy said, "It was another great experience for the players; David was so inspirational, one of the best we've had with his true passion for the game and honest talking to the lads. I think many could really relate to him and took on board his advice; there was total silence in that room as he was talking and each and every player was fully focused on what he said. Last week we delivered an induction session to the players talking about many of the points David raised, the ups & downs, the ladder you have to climb, the opportunities and giving 100% and his reiteration of this was key to the Academy players. A massive thank you to David for coming in and I'm sure we will see so much more from him over the coming season."

David has had a fantastic career in the game, kicking off his playing career as a youngster at Liverpool FC under the management of Raffa Benitez and experienced life with the club during the great seasons when they were European Champions. David then moved to Carlisle, Shrewsbury Town and Tranmere Rovers, after which he played for the Scottish Leagues, where he helped the Scottish side to the Scottish Cup Final with a winning goal against Celtic in the cup semi-final. Now persuing a coaching career in the game, David is going through his coaching badges whilst playing for non-league side Warrington Town. 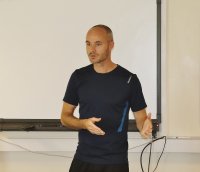