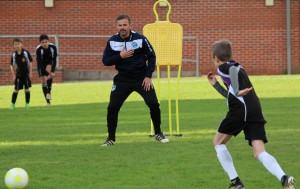 Wellens, who began his career at Manchester United before signing for Blackpool in 2000, took the academy players through their paces with a selection of 'phases of play' game sessions.

After his spell at Oldham, Wellens made his successful move to Doncaster Rovers in the summer of 2007 where he became an instant fans' favourite, helping the club rise into the Championship for the first time in 50 years.

Now 36, Wellens also shared with academy players his experiences of breaking into the professional game having represented ten separate clubs during his career.

Head of Football, Nigel Keogh, said, "It's always great to have these guest sessions at our academy, but especially having Richie involved is fantastic. What a great opportunity for the boys to gain knowledge, talk first hand to someone who has worked hard to be successful in the game, and to be coached by a first team coach".

Wellens time at Doncaster came to an end in 2009 after he had helped the club to consolidate their Championship position as he moved to Leicester City. He then returned to Doncaster for 18 months before joining Shrewsbury Town under the management of Micky Mellon.

In his time in the Midlands, Wellens made 129 appearances, scoring four goals, and winning the club's Player of the Year in 2011.

Wellens is now fascinated by the traits of Pep Guardiola, Jurgen Klopp and Jose Mourinho as he completes his coaching badges and develops his talents as first-team coach at Oldham Athletic.

The football programme at Ellesmere offers 14 hours of professional academy standard coaching each week, alongside subject-based qualifications including GCSEs, BTEC Diploma in Sport, A Levels or the International Baccalaureate.

The academy has attracted a range of players from Germany, Spain, USA, Mexico, Asia and the UK.