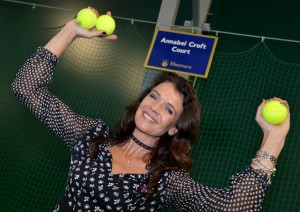 Tennis ace Annabel Croft served up a treat for students at Ellesmere College. The former British number one officially opened the schools new four-court tennis centre, which will be used for tennis lessons, matches and tournaments at the school.

Impressed with the facilities on offer at the school, Annabel Croft enjoyed a busy afternoon when she visited the centre and spent time on the courts with academy players and tennis coaches. Annabel certainly packed plenty in on her first trip to North Shropshire.

Annabel said "I am so honoured to be invited to the opening ceremony and it is such a pleasure to see this amazing facility. When I grew up, there was very few indoor courts in the country that I had to travel from Kent to London, a journey of 2 hours. So for the pupils of Ellesmere to have such a facility on site it's really special".

The school already has several outdoor tennis courts as part of its campus but the new indoor centre, with four full-size courts, means children can play regardless of the weather.

Annabel, now as happy in the commentary box as on the tennis court stressed the importance of appreciating our current golden-era of professional player. "When we look back on this generation of players, particularly Andy Murray, at the top of his sport, Heather Watson and Laura Robson, we will say what a special era it was. We have to enjoy what's happening right now and really appreciate it".

The centre took around nine months to complete and each tennis court was named after inspirational members of the Shropshire tennis community, including Barbara Goolden, former LTA President, Cathie Sabin and the Shepherd family, who helped with funding the project.

Thank you to @Annabel_Croft for visiting @ellesmerecoll this afternoon and opening our new #tennis facility. pic.twitter.com/ZTqo7nnbAR

Headmaster Brendan Wignall said: "Ellesmere has a national reputation for its sporting prowess and this is a great development, which will not only allow us to develop our tennis to an even higher standard but should help more people get involved in tennis across the community.

"It's an enormous building and a fantastic facility and I am delighted that Annabel Croft has agreed to open it for us.

"Many young people dream of playing sports around the world like she did and who knows, this centre could help make a Wimbledon finalist."

The local community will also be able to benefit with coaching sessions and court booking times made available to local schools and clubs.

Tennis coach at the school Stephen Welti said: "We have 120 students playing tennis every week already, it's one of our biggest sports. The hope is that we can grow participation and excellence in our fabulous new facility not just for the students, but also for the wider community".