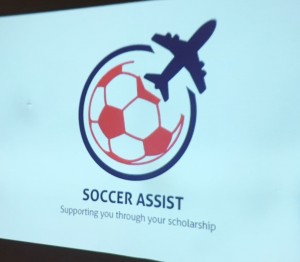 The Ellesmere College Football Academy is not only taking their players further on the pitch with their dedicated professional football coaches and focused training sessions, but off the pitch too - by supporting their future career options both at home and overseas alongside their academic studies with support from IH Manchester.

Last week, IHM Ellesmere College and IHM Manchester city centre squads enjoyed a presentation by Tyrelle McLeod-Bentley from Soccer Assist USA. Tyrelle set out all the different options for playing top quality football on a college or university scholarship in the USA. It was exciting to learn how many US educational institutions offer young players the opportunity to fund their studies whilst playing soccer at the top level. For many young players this sees the launch of their pro football career.

Tyrelle then watched and assessed the players in an eleven a side match which saw a team from each squad compete. He was impressed by the level of football that he observed and has called back 5 Manchester and 2 Ellesmere players for a further scholarship trial. Following the game, Tyrelle gave an hour long presentation and Q&A on the routes into the USA and how he can work with players to help them to achieve that dream.

IHM Football Academy Director, Mick Brennan, said, "It was a great day for us at IHM. To have all the players on one site and to be able to see the progress that the players have made is really pleasing. The game was played with great spirit and was highly competitive. Both teams have impressed me today. The strength and understanding of the Manchester lads was great. However, what stood out more than anything else was the incredible journey that the Ellesmere lads have made. They were organised, tough and competitive, keeping a great shape and playing some of the best football in the game. Well done to them all."

He continued, "I'd like to extend a big thanks to Tyrelle for making the trip to Ellesmere College. There were a number of players who were really interested in the US opportunity and we will be following up on this in the coming weeks. Watching some of the footage of the football in the USA that Tyrelle showed us demonstrates that it's at a great level, and from what we saw in the game a number of our players could be really successful there. We wish them all the best."

American University agency, Soccer Assist - helps academic students that participate in sports gain acceptance into American Universities. Launched in 2015 by Tyrelle McLeod-Bentley and Junior Osei-Tutu, the pair identified the need for support for international scholarship students placed by agencies in the US, offering support to aspiring footballers throughout their college careers and providing them with opportunities to break into playing professionally.

Today, alongside their scholarship packages, Soccer Assist has expanded to offer clients a government-funded football and education scheme which has each student playing football four times a week and competing in annual international tours while earning a BTEC Level 3 in Sport.

2016 also saw McLeod-Bentley named by The Sports Industry Group and Barclays as one of 30 future sports industry leaders. 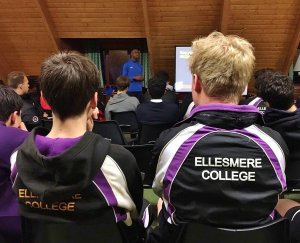