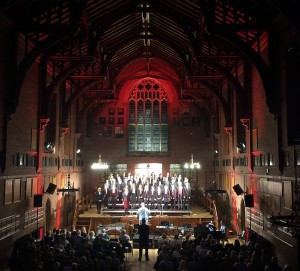 Back in October, Ellesmere College held a concert to raise awareness and funds for Pancreatic Cancer. The school's talented musicians were joined by former students and the Prestfelde choir, providing an evening of entertainment that was thoroughly enjoyed by all.

The concert was organised in aid of Graham Mullock who sadly lost his battle with Pancreatic Cancer last year at the young age of 46. Graham's father, David, is a former student of the College who, along with his wife Robyn, has funded four students through the Sixth Form providing music scholarships.

The concert began with a wonderful selection of songs from 'Joseph and the Amazing Technicolour Dreamcoat' performed by Ellesmere College's Lower School Choir & Prestfelde School Choir. The concert also featured some outstanding individual performances from the College's talented students including Amber Coxill's conduction of the most well-known film scores by John Williams, Rhian Carys Jones' impressive performance of 'Chio Mai Vi Possa' and Old Ellesmerian Seren Devismes, currently a student at the Birmingham Conservatoire, who gave a beautiful performance of the challenging 'O Mio Babbino Carro'!

After only recently learning the piano, Bells Lewers showed remarkable courage when she braved her nerves and gave her first ever public performance alongside Pat Wood when they performed a two-piano Mozart Sonata in D-Major. The Chamber Choir gave marvellous performances of a range of pieces, and members of the community also got involved through the Ellesmere College Choral Society, who performed compositions from the likes of Thomas Morley.

The concert came to an end with a touching performance from the Chapel Choir of Graham Mullock's favourite song 'You'll Never Walk Alone', conducted by his father, Mr. David Mullock, who took to the podium to conduct the choir in memory of his son.

Over £1,000 was raised for the charity who focus on treatment research and supporting individuals with pancreatic cancer. Megan Smart, Community Fundraising Officer for Pancreatic Cancer UK, said: "We really appreciate your support and we simply could not take on pancreatic cancer without you. Pancreatic cancer remains both the lowest surviving and quickest killing cancer. That is unacceptable and thanks to you, we are making a stand. In the last few years, we have seen survival rates increase for the first time in decades and contributed towards UK research investment which has now reached £10 million a year."

The College would like to thank everyone who attended and contributed, and to all the volunteers and performers for their hard work in organising the concert.

For more information on the upcoming events at Ellesmere, please visit our What's On Booking Form.