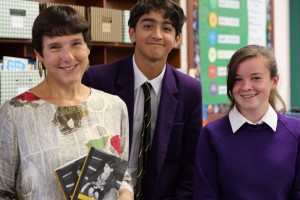 GCSE students at Ellesmere welcomed multi-award-winning playwright Diane Samuels, whose 'Kindertransport' remains one of the most moving plays the West End has seen.

Diane delivered a talk to Year 10 and Year 11 pupils and provided a unique insight into her life as a playwright and children's writer. The playwright's breakthrough came in 1993 during her first production of "Kindertransport" which was directed by Abigail Morris for Soho Theatre Company at the Cockpit Theatre.

Diane said "The production was moving and true to the play. The reviews were very good and people queued around the block for every performance for returns. It was very exciting".

Her other plays include The True-Life Fiction of Mata Hari, Cinderella's Daughter, and 3 Sisters on Hope Street. Diane has also written widely for BBC radio and for younger audiences, having a long association with the Unicorn Theatre, which is the UK's leading theatre for audiences aged 2-21.

The creative writing workshops were followed by question and answer sessions, in order to get students more interested and excited by reading and inspire them to write.

Gemma Heald, Teacher of English and Drama, said "This visit offered the best opportunity for students to ask exploratory questions regarding the play and gain insight into the significance of the writer's personal background and inspiration for writing 'Kindertransport'".