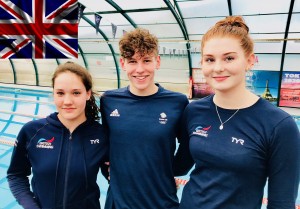 In doing so, they continue the growing trend of international representation from the College's increasingly world renowned Titans Swimming Academy. Team GB selected thirty elite swimmers to represent Great Britain at these championships and Ellesmere College was one of only five programmes to contribute more than one swimmer!

A fantastic event in Finland saw 600 swimmers compete in Helsinki from 46 different nations. Each swimmer went into these championships intent on showing their potential ahead of Tokyo 2020 and were very focused on closing the gap with their Russian counterparts.

Team GB also continued its own Olympic preparations by delivering another strong performance on the international stage in these championships.

The team finished 3rd in the medal table and also 2nd in the prestigious overall points table for the European Championships Trophy. A great result and one in which every Ellesmere swimmer played their part.

The British team alone boasted six senior champions, including Ellesmere's Anderson, and therefore the competition was fierce over the four-day championships. Ellesmere's contribution was spearheaded by Anderson, who picked up three golds and a silver. On the final day Hutchinson finished 5th in the 400 IM finishing 3 seconds faster than his previous personal best.

"We are delighted to see the continuing success of Freya on the International scene," said Alan Bircher, Director of Swimming at Ellesmere College, before going on to say that, "Angharad's continuing International selection and Charlie extending his participation in the elite GB is fantastic for each of them and truly deserved. The great news is that as good as these three are, they are only a fraction of our current and future international talent pool."

Hutchison reached the semi-finals and Evans was only denied a semi-final place on a technicality. Having posted the 11th fastest qualifying time in qualifying for the 50m breast stroke, Evans was not allowed to progress because two of her GB team mates had posted faster times and places are restricted to two per country.

From a program point of view all of the swimmers swam well and fast, either posting Season Best Times or All Time Best Times.As a result, all three raised the bar within the programme by setting the following new programme records - Anderson (50m Free), Evans (100m Breast) and Hutchison (400 IM). In doing do both Anderson and Hutchison set new Midland Senior Reginal records too! From a records point of view, there is every possibility that the program will set more than 150 new records this season, which is simply astonishing.

"This is an extremely important year for British Swimming. The second year of this Olympic cycle is one of our final opportunities to unearth some new talent ahead of the 2020 Tokyo Games," comments Tim Jones - Head of Elite Development within the GB Team - before going on to say, "We hope to be able to identify some more hidden gems at this event that can become potent forces on the British team for many years to come."