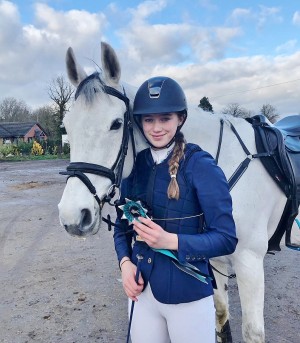 Competing in the highest show jumping class at the competition at 1.10m, Harriet - Yr 10 - and her horse Annie, took first place against some stiff competition with a series of impressive clear rounds through the day.

This event qualifies school teams and riders from the counties to compete in the National Schools Final at Hickstead where they will be competing in the Elite 1.10m Individual Final on May 11th against all the regional qualifiers.

Ellesmere College has a well-established and successful Equestrian Team that has seen success at many levels of the National Schools events across the country including dressage, show jumping and eventing.

The Equestrian Team also forms part of the Modern Pentathlon offered at the College to Olympic level that also covers swimming, shooting, running and fencing with world class coaching provided at each discipline, and with the World Academy of Sport (WAoS) accreditation allowing provision for a 3 year International Baccalaureate programme to enable elite athletes to meet the demands of both their academic and sporting schedules.

Kate Curzon, Teacher of Maths and Equestrian Team Coordinator said, "Harriet's win is a fantastic achievement in a testing class and we wish her the very best of luck at Hickstead on 11 May. The Equestrian Team have had an impressive year and we are looking forward to building on this momentum in the future. It should be borne in mind that our team members could not compete without the incredible support of their hard-working parents, for which we are all very grateful."

Harriet described how excited she was about competing, "We headed off to Southview Equestrian Centre for the NSEA 1.10 open county/Hickstead elite qualifier in the morning, so by the time the course walk was scheduled for at 4pm, I was quite nervous but also very excited. The course was a single phase round where half the course is jumped against the clock! Annie and I warmed up well and being her usual (spooky) self, felt great. We jumped a clear round with a fast time and because I was drawn first to jump I had to watch everyone after me hoping I stayed in top position. We are thrilled with our qualification for Hickstead and looking forward to the season ahead."

Good luck to Harriet and Annie at Hickstead on the 11th May. 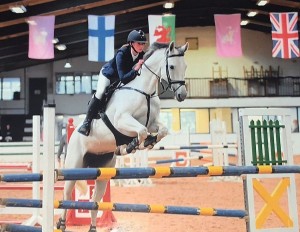