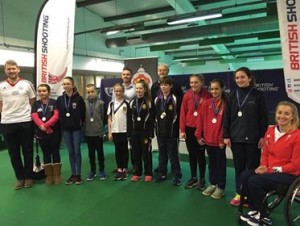 Ellesmere students are celebrating after picking up Gold at the National School Pistol Finals at Stoke Mandeville last week.

The pupils qualified via the Northern British Schools Pistol Qualifier, which was held at Ellesmere last November. The 2017-18 Championships consists of five qualifying events which feed into the National Final. It consists of Individual and Team events each in three age categories for both able bodied and disabled athletes. All categories are mixed gender.

Tom Ryland, Shooting Coach at Ellesmere, said "The shooting success at Ellesmere continues to grow and it is clear to see what the students are able to achieve with the right level of focus and dedication. It was also great to see Old Ellesmerian, Harriet Watson, make the senior final, whereby she gained a Bronze. So the legacy of Ellesmere shooting on each pupil is still as strong, even after they leave the College".

After the event, British Shooting commercial and events coordinator, Gorgs Geikie said: "We are so happy after a hugely successful competition. It has grown year on year and we hope this will inspire those who took part to stay involved in the sport for years to come.

"We had over 500 entries for the Championships overall, with 80 teams from 217 different schools, which show there is a huge interest in this sport. We can't wait to get going again for the 2018/19 Championships at the end of this year!"