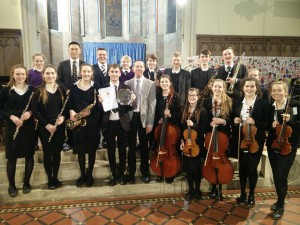 Ellesmere College students celebrated a record year at the Oswestry Youth Music Festival with successes across all categories.

The talented musicians from the school came away with 54 top three places as they competed against a very high level of participants in over 70 different classes, from vocal classes to piano, woodwind, brass and strings. New classes added this year included Drum Kit and Musical Theatre Ensemble, in which Ellesmere also achieved outstanding results.

Ellesmere College entrants captured 24 first places and two out of six category winners in the Under 15, Under 18 and Under 21 competitions. On the final day of the festival, the Under 15 and Under 21 category champions went head to head to produce an overall champion in each of the two age ranges; Emily Ashley became the Under 15 Overall Champion playing the Cello, and Chelsea Chao was a close runner up in the Under 21 final on the piano.In the Vocal Solo Under 15 Class, Ellesmere College took all three top spots with Anouska Bancks, Kizzy Lumley-Edwards and Maddie Freer-Carmichael. Emily Ashley took first place in the prestigious Oswestry Town Council Cup (The Gull Award) Final.

Chelsea Chao and Seren Devismes will be competing in the Rotary Musician of the Year Regional Finals on Sunday afternoon in Wolverhampton and, if successful, will proceed to the finals which will take place in Edinburgh in May. The Chamber Choir be travelling down to the Royal Festival Hall in London to compete in the finals of the Barnardo's National Choir Competition on Monday.

Tony Coupe, Director of Music, said, "We would normally do very well in the ensemble classes but this year what changed was the quality of performances given in the individual classes which I am delighted to see. I would put this down to great team work from the instrumental staff and the wider college staff feeding into the skills, confidence and expressive development of the students which allows Ellesmere students to perform to a really high standard."

The Oswestry Youth Music Festival, which dates back to the Queens Jubilee of 1977, always welcomes a high standard of entrees including former winners and new comers, many of whom have gone on to successful professional music careers.