Ellesmere students handed the chance to learn from the best 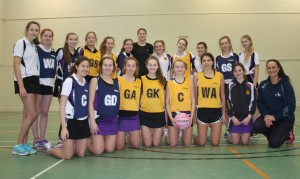 Just as Sky Sports announced the biggest ever TV rights deal for netball in the UK. Ellesmere College's talented young netball stars have been picking up tips from one of the sport's most experienced and influential coaches, Melissa Hyndman, who visited the school to take a few coaching sessions.

Originally from New Zealand, Hyndman, has had many netball coaching roles including Head Coach for the New Zealand Maoris team, Fiji national team and most recently the Welsh National team.

Melissa said, "It's lovely to be asked to host a few sessions at Ellesmere College. I have heard a lot of good things about the school and everyone seems to have enjoyed my coaching. All the netball teams were really keen to learn a few new skills and I think they will all have a good season this year".

Hyndman took Wales from 19th to 8th in the world, the highest they have ever been. Hyndman has also overseen the most successful season in the history of the Celtic Dragons, a campaign in which they reached the Super League grand finale.

Netball Coach Tina Cox said, "We have regular guest coaches from international teams that visit the college and it's great to have Melissa taking a few sessions. She is at the top of her sport in coaching and our teams really enjoyed the sessions."