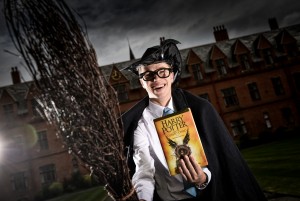 Sixth form student Jaimie Wakefield entered into the world of witchcraft and wizardry in the stage performance of J.K. Rowling's Harry Potter and the Cursed Child. Jaimie visited the critically acclaimed play as part of a weekends work experience where he joined up with the cast and stage management team at the Palace Theatre in London.

The 17-year-old, walked 10 miles around the backstage and substage areas. Additionally, within the first 15 minutes of the first production, he was involved in over 200 cues as the performance unfolded.

He said: "Some of the most interesting aspects of my experience was the activity backstage and the reliance on effective teamwork, particularly in ensuring all aspects of the spectacular special effects occurred safely throughout the productions."

The critically acclaimed play recently became the most awarded West End production in the history of the Olivier Awards, winning a record-breaking nine awards including best new play and best director. The story begins 19 years after the events of Harry Potter and the Deathly Hallows and follows Harry Potter, now a Ministry of Magic employee, and his younger son Albus Severus Potter, who is about to attend Hogwarts School of Witchcraft and Wizardry.

Following the experience, Jaimie is now even more determined to forge a career in production management and aspires to study technical theatre production and stage management at university. "One of my UCAS choices is to study at the Royal Central School of Speech and Drama from where a former Ellesmere College art centre manager was a graduate," he added.