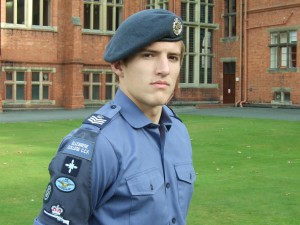 An Ellesmere College Sixth Form pupil was delighted recently to learn that he had been assessed to have excelled during the RAF Air Cadet Leadership Course that he had participated in during the summer holidays.

Held at RAF Brize Norton, for the 60 Sixth Form pupils in the UK who have been awarded RAF Sixth Form Scholarships, the Air Cadet Leadership course is run annually by experienced Regular officers and Senior NCOs. The course focuses on all the aspects of leadership and throughout the week Corporal Martin Jones, a member of the Ellesmere College Combined Cadet Force (RAF) Section, took part in a vast variety of physically and mentally challenging tasks with peers from all over the country.'

Squadron Leader MC Valentine, the Officer Commanding based at the Western Area Headquarters for the RAF Combined Cadet Force in Cosford wrote in a letter to Martin, 'Only a very select number achieve a Merit Pass which makes your result all the more noteworthy.'

Graham Hutchinson, Senior Officer Commanding for the CCF at Ellesmere College commented, 'Regardless of his future chosen career, the experiences gained by Martin on the course will have given him valuable team-building and leadership skills as well as real experiences which help to manage the challenges and opportunities in today's world.'