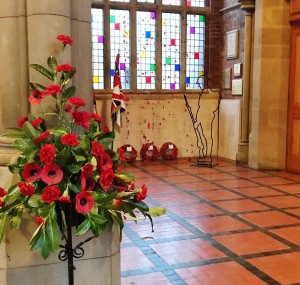 Former and current Ellesmere College staff, students and families gathered together on Remembrance Sunday to remember those who died in conflict and those who continue to serve in our armed forces around the world.

The service, held in Ellesmere College's Chapel of St Oswalds, was led by Father Phillip Gration and paid tribute to not only those 218 Old Ellesmerians who had fallen in the first two Great Wars, but also to those who have given their lives since then, those who returned but carry the scars of battle, both mental and physical, and those who have felt the pain of having loved ones killed or injured in war. Hymns were led by the Ellesmere College Chapel Choir.

Other civic leaders and members of the armed forces, both past and present, along with local representatives of community organisations were also present.

The service, held at the College annually, is always well attended by Ellesmere College's 'Old Ellesmerians', many of whom came up through the ranks of the services via the College's CCF programme, or who have family or friends who have been impacted by conflicts past and present.

The service was followed by the Old Ellesmerians' Luncheon in Big School and a tour of the College.

Nick Pettingale, Director of External Relations said, "One hundred years ago today the world stood on the brink of peace as four years of bloodshed were about to come to an end. In this centenary year of the Armistice, we hold in our thoughts and prayers all those who fought in the two Great Wars. But as we now know, they were not the end of wars, and as we came together we remembered all who have suffered in conflict."

Headmaster, Mr Brendan Wignall said, "It is always a moving service and the fact that so many Old Ellesmerians come back together to remember their fallen every year on this day is our tribute to those men and women. May we all remember the price they paid for peace."

Richard Taylor, OE Talbot '67 and former member of staff, also laid a wreath at the Cenotaph in Whitehall in remembrance of OEs who gave their lives in the two World Wars. He was accompanied by his son, Lt Col Edward Taylor RA, who laid wreaths on behalf of his old school and to honour family members who died in WW1. 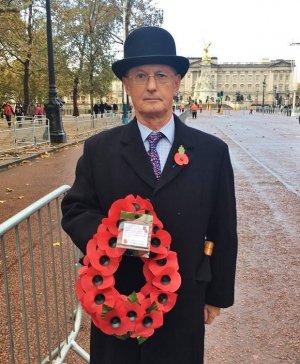