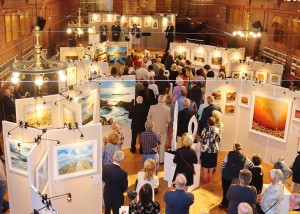 Ellesmere College played host once again to the National Art Exhibition featuring over 300 works of art from 80 local and national artists and sculptors. Now in its seventh year, the Exhibition celebrated record attendances and sales throughout its four day opening.

The VIP Preview evening, on Wednesday 30th May, welcomed over 300 local dignitaries and art lovers, allowing them to preview all the pieces on display and chat to the artists about their work over champagne and canapés. This year saw a record number of sales on the Preview Evening from popular local artists such as Barbara Goolden, Graham Cox RCA and Ellesmere's The Gallery at Number 3.

The Exhibition was officially opened by its patrons, Sir Algernon Heber-Percy, the Lord Lieutenant of Shropshire, Mrs Diana Flint, former High Sheriff of Shropshire, Carolyn Trevor-Jones, Chair of NADFAS and Brendan Wignall, Headmaster of Ellesmere College, who gave a warm welcome to the guests.

The feature artist at this year's exhibition was the UK Comics Laureate, Charlie Adlard, of Shrewsbury, most well known for his work on the Walking Dead, as well as popular publications including Savage, the X Files, Armitage and the 2000AD series, including Judge Dredd. Charlie also displayed previously unseen artworks from lesser known comics including White Death, The Breath of the Wendigo and Codeflesh along with some of his life drawing sketches.

Nick Pettingale, Director of External Relations at Ellesmere College, said, "The Art Exhibition is now a well established event in the art calendar and we are very excited about next year's event being bigger and better than ever before."

With over 1000 visitors this year across the 4 days, Nick commented, "We are delighted with the visitor numbers this year as we aim to provide a showcase to profile both local and national artistic talent in the region and there was something for every taste and budget."

Visitors and guests were also encouraged to vote for the 'People's Favourite' piece of art or sculpture at the exhibition with the artist with the most votes winning £100. This year's winner was Ben Waddams 'The Sundowner' - a detailed oil painting of a cheetah reclining on a rock in the African savannah setting sun.

An array of paintings, drawings, ceramics and sculptures were displayed by notable artists including Max Baccanello, who exhibited a series of paintings commissioned especially for the exhibition, John Alford, Jane Brookshaw, Graham Cox, Rebecca Pells, Mark Warner and members of the Royal Cambrian Academy.