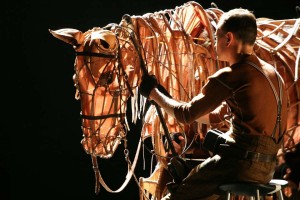 This years Ellesmere National Art Exhibition looks set to be bigger and better than ever before!

This years featured artist - Rae Smith - has worked on the hit stage show War Horse and will be among over 80 artists and sculptors exhibiting more than 300 pieces of work at the annual National Art Exhibition and sale of works held at the College.

There will also be a preview evening on Wednesday 29 May hosted by its patrons, including newest patron - former UK Comics Laureate - Charlie Adlard, from Shrewsbury.

Nick Pettingale, Director of External Relations at Ellesmere College, said: "The exhibition celebrated record attendances and sales throughout its four day opening last year and we are delighted to have such a high calibre of featured artists once again this year.

"Now in its eighth year, the aim of the arts exhibition is to raise the profile of the arts in the region. We have always been passionate about the Arts at Ellesmere College and are eager to showcase artistic talent from both local and national artists. This is not a display of students work, great though that is, but rather that of professional artists and sculptors."

The Olivier, Tony and OBIE award-winning British designer Rae Smith works regularly in a wide variety of styles and genres.

Her theatre designs are frequently seen in Britain in the West End and at the National Theatre, in the USA, Europe, Japan and on International Tours. As well as War Horse, Rae's designs for the National Theatre include The Light Princess, All's Well That Ends Well, St Joan, A Pillar of the Community, Season's Greetings, This House, and Closing time, among others.

Another featured artist at the popular event - also returning again this year - will be Maximillion Baccanello, a young contemporary portrait artist who studied at Charles H Cecil studio in Florence, Italy. He previously attended Chelsea College of Art and Design at the University of Arts in London, after graduating from Shrewsbury School, where he was awarded a Fine Art Scholarship.

He has exhibited with the Pastel Society at Mall Galleries and the Royal Society of Portrait Artists at Cork Street Galleries, where he was awarded runner-up prize from the Tiranti Group. His portrait of the Cauldwell family was unveiled - and now hangs - at Blenheim Palace.