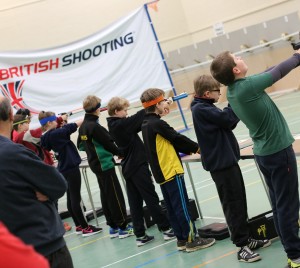 Athletes with shooting backgrounds from Pony Clubs, Scouts, Modern Pentathlon competed for a spot at the National Final, all of whom were new to the sport of pure pistol shooting.

Despite of the broad range of shooting abilities, head GB Coach Steve Pengelly indicated that the performances were of a very high standard. The senior category final required a shoot off between Shannon Davies and Guy Anderson, where it took three rounds to finally distinguish which athlete would continue in the competition for a chance at the gold medal.

The day was made a success by the experienced volunteers who assisted in running a smooth and exciting Pistol Championships; this included members of the British Pistol Club, the West Midlands Regional Shooting Network and Welsh Airgun Association.