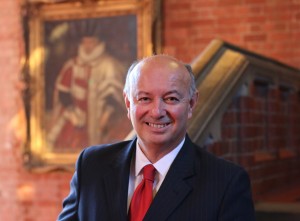 Brendan Wignall, Headmaster of Ellesmere College, has won top marks after being named as one of the UK's best leaders of a public school. Mr Wignall has been shortlisted in the Best Headmaster category at the annual Tatler Schools Awards 2017.

The Awards, now in their 14th year, recognise the best in independent schooling and tie in with the Tatler publication's annual Good Schools Guide which features Ellesmere College. He is one of only five Headmasters independently selected for the honour, which included distinguished Headmasters from Tonbridge School, Kent, Merchiston Castle in Edinburgh and Wimbledon High School in London.

Mr Wignall said "I am thrilled to have been shortlisted for this year's awards - it's not often that such an award finds its way north of Oxford and I think this reflects the remarkable nature of Ellesmere College rather than its Head. Ellesmere is a great school and it has been for a long, long time".

"These days we provide a remarkable education for girls and boys as we prepare them for the complex world that lies beyond school. That's what really matters."

The award is a fitting accolade to Mr Wignall, who has been Ellesmere's Head for 21 years, and says he plans to stick around for at least another 15.

During his leadership the schools has almost doubled in size, attracting students from 32 different nations, introduced the International Baccalaureate and BTEC courses, and seen world class facilities develop on campus. The Headmaster has also led the opening of a new Sixth Form in Malaysia and recently launched the schools first Football Academy with 35 boys trialling for Premier league and Championship Clubs. This is a further layer in the sporting growth and provision of the College, with the recent Sports Mark Gold Award following on from the World Academy of Sport (WAos) award, with Ellesmere being only one of only 9 schools in the world to be given this level of accreditation.

With a nationally recognised Platinum award by the Arts Mark Council and recent successes at the Education Business Awards, with the College winning the educational visits category and receiving a highly commended for music, there is a clear understanding as to why the school was recognised for its breadth and ability to offer the tailored educational pathways that exist for every student at Ellesmere.