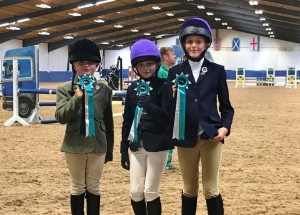 On Saturday 21st September the Ellesmere Equestrian Team sent 4 riders and 5 ponies to Beaverhall Equestrian Centre to compete in the NSEA Showjumping qualifying rounds for the National Championships. One team had already qualified in the 90cm class, so an 80cm team was entered - Tabitha Leonard, Anna Maughan, Bella Spencer-Blow and Imogen Spencer-Blow - and came 4th - which qualified them for the NSEA National Plate Championship in November at Keysoe Equestrian Centre.

Immy Spencer-Blow, Yr 5, also entered the 1m class and came 3rd individually, and considering she was the youngest of the 16 riders entered, she qualified for the National NSEA championships at Addington Manor which she attended this past weekend.

The 90cm Showjumping Team - Jake Stockton, Bella Spencer-Blow and Imogen Spencer-Blow - attended the NSEA Championships, at Addington, on Saturday, minus one team member due to an injury to Tess O'Brien's horse, putting the Ellesmere Equestrian Team at an immediate disadvantage against the other schools who had teams of 4. There were over 200 children, all from senior schools, so Ellesmere had also presented the youngest team. Despite this Imogen and Jake held strong against the older children and had extremely fast rounds with just 4 faults and Bella had 20 faults managing a naughty pony! No rosettes but a really great effort from the youngest riders in the class.

Imogen also competed in the 1m 'Jumping with Style' and the 1m Showjumping. Again she put on a fantastic performance as the youngest rider but not quite in the rosettes.

A fantastic set of results from our Equestrian Team and we wish them well for the November NSEA National Plate Championship in November!