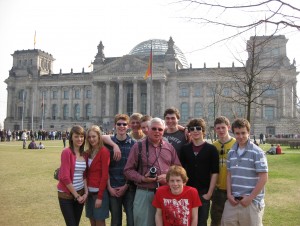 During the recent Easter holiday a party of Ellesmere Sixth Form historians had an opportunity to visit the remaining evidence for Cold War division together with other sites in Berlin relating to its history during the last century.

The students were particularly moved by the recent Jewish memorial near the Brandenburg Gate and excited by being able to ascend to the top of the Reichstag Dome. Philip Wood, Head of Sixth Form and History Teacher who planned this trip, commented, 'The post World War II rebuilding of the city has led to some of the most impressive modern architectural projects in Europe and since 2009 marks the twentieth anniversary of the collapse of the Berlin Wall, it was a most poignant, interesting and enjoyable trip for us all.'

Joshua Boswell, who is studying for A levels, including Performing Arts added, 'One of the highlights for me was the visit to the former secret police Stasi headquarters in the east of the city. The gadgets and surveillance techniques on display could have come straight out of a James Bond film.'