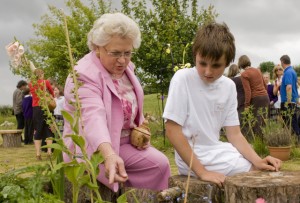 Following two years of development and much support from many people, the Ellesmere College Wildlife Garden was ready to be opened officially on Thursday 26th June and following a lunch for all those who supported the project, Margaret Thrower cut the ribbon to the Garden's archway entrance. Under menacing clouds, visitors were shown around the garden by Lower School Year 5 pupils who had been particularly involved with the project.

The Ellesmere College Wildlife Garden has been a project involving pupils, their families, staff and Shropshire Countryside Services. The idea for a wildlife garden began in 2006 and sprang out of an interest from the School's environment group, 'The Green Team', in providing more wildlife habitat at the School. A small experimental wildlife garden was created by the Team whilst they sought financial support from the Ellesmere College Parents' Society. Upon receipt of a generous £1000 donation towards the establishment of a garden, the project began in earnest under the leadership of Cathy Allen, Head of English as an Additional Language, and teacher in charge of the Green Team.

Situated on a bank alongside the Lower School building, younger pupils were invited to input to the development of the Garden. In January 2008, with the help and advice of Shaun Burkey from Shropshire Countryside Services, Year 5 pupils planned the garden and the project was further embraced by the Lower School Wildlife Club. Together pupils battled against the elements, protecting the fledgling plants from the wind, rabbits and grass .

Throughout, the wildlife garden was superbly supported by many parents. First to take an interest was an Environmental Consultant and parent, Simon Martin-Jones who with his wife spent a few weekends digging out bogs and building flower beds. They were followed by another parent, David Carr, a local Farmer who spent a Sunday digging out the bog garden.

The Senior School Green Team continued to be involved and have done a lot of the hard labour planting, moving earth, and digging. A wooden bench was created from beech trees that had fallen around the College during the 2007 storms by another supportive parent, Jim Quinlan. Margaret Thrower was presented with an ornament made from the same beech tree.

Besides an already colourful raised border, within a short time the Wildlife Garden has also become a haven for butterflies and other insects. Numerous goldfinches and nuthatches have been sighted in the vicinity of the Wildlife Garden. Cathy Allen, the Teacher who had the original inspiration for the Ellesmere College Wildlife Garden commented, 'It has been fabulous how our pupils and then their parents embraced the project and have so enthusiastically helped with the gardening in any way they could. Most importantly, a Grandmother's participation transformed the project. Mrs Pat Venner would turn up with a car full of plants and with boundless energy and enthusiasm. The garden is just establishing itself, and we look forward to watching it grow for many years to come.'