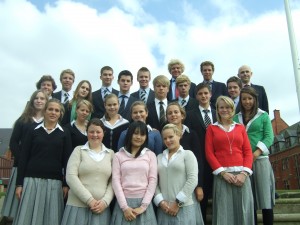 Following the recent celebrating of some exceptional International Baccalaureate Diploma (IB) results during the summer holidays, Ellesmere College has welcomed into the Sixth Form a fourth class of IB students from around the world.

This highly successful worldwide course has continued to grow and develop at Ellesmere College, and for the first time UK students will be joined by IB students from Japan, France and Switzerland. Along with pupils from Germany and Romania they will be studying for the exciting and challenging IB diploma, and following a wide range of courses.

All IB students pursue courses in six subjects chosen from the following (three at Higher and three at Standard level, depending upon individual interests): native language; a second language (which can be a beginners' course); humanities and social sciences; experimental sciences; mathematics; the arts (or an additional subject from one of the other five options).

The IB is highly regarded by Universities as it offers more able students the chance to show possibilities beyond the level offered by A Levels.  Last year's IB students at Ellesmere averaged an equivalent of just over 3 grade As at A Level each, and the top performer, Hendrik Scheer, who has moved on to the London School of Economics, achieved an equivalent of over 5 grade As at A Level.

Local families interested to learn more about the International Baccalaureate are welcome to join staff and IB pupils at Ellesmere College at the School's Open Day on Saturday 10th October between 1pm and 4pm.