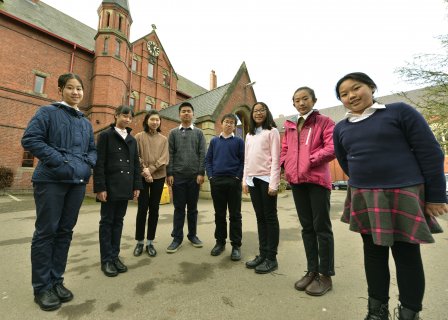 The top education on offer in Shropshire is set to feature on Chinese TV as a group of students from Shanghai travel to the county for the first time.

A group of nine pupils are spending the week at Ellesmere College, along with a reporter from The China Daily newspaper and a television crew.

The pupils, aged between 11 and 14, won a national competition run by The China Daily to have a taster experience of life at a successful UK boarding school and is sponsored by the bank of China.

Brendan Wignall, Headmaster of Ellesmere College, said he was delighted to be welcoming students for what he hopes will become an annual event.

"The Chinese pupils seemed very excited when they arrived in Shropshire," he said.

"It is a long way to come for an 11-year-old particularly, but they instantly had a warm welcome in Ellesmere and enjoyed spending the weekend with our pupils.

"The aim is to experience the full academic and cultural life of a successful boarding school and I think they are getting just that at Ellesmere.

"It is going very well and we hope a similar visit can happen again next year."

The trip has stemmed from a partnership Ellesmere College has with UK Boarding Schools, based in Shanghai and Beijing.

Each of the visitors this week have all been assigned a 'buddy' who is showing them around Ellesmere College and taking them to lessons.

They will also be inspired by talks from year 13 students Victor Zhou, 19, and Wayne Wang, 17, who have just secured places at Cambridge University having moved to Ellesmere from China over a year ago.

Angel Xia, a boarder since year nine and now in the Sixth Form who attained nine A*s at GCSE last year, will also be speaking to the Chinese pupils about her time and love of Ellesmere and Shropshire before they all fly back to China on Friday.

"We want to show off not just what Ellesmere College has to offer, but Shropshire as a whole and the UK as well," continued Mr Wignall.

"The students are going on cultural trips within the area and to see local attractions in order to make the most of their time with us.

"The documentary crew have been everywhere with them and have spoken to a lot of current Ellesmere College students too so we are really look forward to seeing the resulting show.

"Although Ellesmere is largely an English boarding school, with only 20 per cent of our students being from 32 different nations, opportunities like this are a great way to showcase just what our county and this country has to offer to many people back in China."