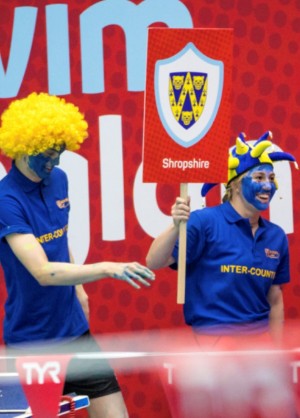 In the maelstrom of Sheffield's Ponds Forge, the national Inter-Counties looks more like swimming's version of Harry Potter's Quidditch World Championships! 1000 swimmers from 39 counties in various face paint, body paint and fancy dress, cheered their teams on at the top of their voices to make this unique event the highlight of the swimming season for many.

Cheshire's swimmers were this year's Division 2 champions with 461 points, and in some gutsy racing Shropshire's swimmers amassed 430 points to finish in 4th place behind Nottinghamshire (444 points) and Derbyshire (431 points) to secure their place at swimming's top table in 2019.

Shropshire swimmers have never finished higher than 10th place in Division 2 before, despite the championship running since 1974! In addition to promotion, the team also won the award for the Top County in the West Midlands by beating rivals: Worcester, Warwickshire and Staffordshire.

Commenting on a famous achievement, County Coach Barnes said, "The team were magnificent and everyone really played their part. Established swimmers doing individual events tend to get the limelight, but the reason we did so well was because of those emerging swimmers, picked for one leg of a relay and cheerfully putting in an outstanding performance."