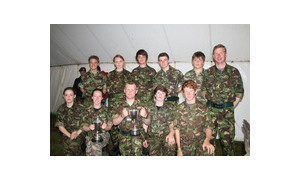 On its return to competition after an absence of some 23 years, the Ellesmere College Shooting Team created something of a sensation in the Ashburton Shield, the premier schools' competition for target rifle shooting.

With little experience prior to the event, the team made every use of the couple of days practice before the match. Although some of the team were actually firing the Cadet Rifle for the very first time, and the team was competing against over 50 other school teams from around the Country, they shot brilliantly to finish 9th overall. They succeeded in beating several renowned shooting schools in the process such as Malborough, Oundle, Sedbergh and Uppingham and finishing less than a handful of points behind Greshams. Its previous highest placing was 39th back in 1987.

Individual success was guaranteed when Sam Williams tied for first place in the Wellington Trophy and then went on to win it in the tie shoot; several other team members managed good placings in the individual competitions and James Slater and Sam both made it into the Schools Hundred, quite an achievement with nearly 550 competitors taking part.

The College Team also won the Marches Trophy for the highest placed school in the West Midland and Wales regions. The Ellesmere College Academy Coach, Tom Rylands, who accompanied the team, commented, ‘I am absolutely delighted with the results and praise all the shooters for the speed at which they learnt how to shoot outdoors in difficult conditions and for never losing confidence in what they were doing.'

Following the School's Shooting team success, Ellesmere were again in the medal hunt the following week, this time as spectators at the first day of the Olympics! Thanks to the very generous support of Eley Ltd, the main ammunition supplier to the Games, members of the College were on hand to watch the first medals of the Games being awarded after a very tense and exciting final in the Women's air rifle discipline.

Next week, 26 members of the College Shooting team travel will travel to Bisley to compete in the National Smallbore Championships. Expectations are high!