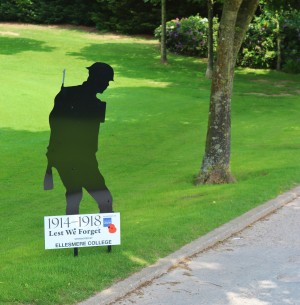 Soldiers from the First World War have gone back to school - in the form of statues at Ellesmere College.

Two Silent Soldiers have been installed in the grounds of the College as part of the Royal British Legion (RBL) campaign to remember those who returned home 'silently' or those who did not return home at all.

Fondly known as 'Tommy's' - the life sized silhouettes have been seen fixed on buildings, gardens, fields, and roundabouts across the country.

At Ellesmere College, one of the statues was purchased by the College and one was donated by the Old Ellesmerians, one of whom is Paul Russell, who used to attend the school.

"We are working hard to support the Royal British Legion and want to recognise the contribution that everyone made to the war," he said.

"When I heard about this campaign I thought it was something we must get involved in and highlight it to current pupils at the College. It ties in nicely with the recent Old Ellesmerian's battlefield trip - over five years a group of us have visited 105 graves of WW1 soldiers who went to Ellesmere and placed a cross and poppy at each one. It has been a moving experience and a very informative one too."

The Silent Soldier silhouettes are cut from black cut dibond and are tough and weatherproof. They have at their base the words 1914-1918 Lest We Forget.

Businesses and local authorities are being invited to support the campaign by sponsoring and displaying one or more silhouettes from September this year until late 2018, when the nation will commemorate the armistice and the end of the war.

The idea was the brainchild of the Royal British Legion Surrey branch and it has spread across the country since.

Headmaster at Ellesmere College, Brendan Wignall, said they are already having an impact.

"A lot of children have asked about the statues already and they are prompting conversations about the war and the people involved," he said.

"They are a great addition to our school grounds and we feel hugely honoured to have them here."

The Royal British Legion is marking the centenary of the First World War with a variety of commemorations and projects from 2014-2018 aimed at remembrance and education.

Other projects run by the charity include Never Forgotten, 1,566 miniature sculptures created by British artist Nic Joly to mark each day that the war was fought, and Women at War 100, remembering the creation of the British Army's first all-female unit in 1917.