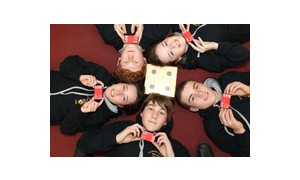 As part of the Ellesmere College Shooting Academy, a group of 6 pupils recently had the opportunity to travel to Dortmund, Germany to participate in an international shooting competition alongside Olympic hopefuls and World Champions from all over Europe as well as The United States and other countries.

The opportunity to participate in the International Match in Dortmund was at the invitation of the British Schoolsteam, supported by Eley Ltd and run by Charles Lee, a former Ellesmere Shooting Coach, who takes teams, selected from across the UK, on tour to compete on an international level. Tom Rylands added, ‘This was an incredible opportunity to experience truly top flight competition and to find out what is needed to make it at the highest competitive levels.

Following this trip, College Shooters won 9 trophies at the Appleton Easter Shoot against open competition of all ages. Tom Rylands, Academy Coach, explained, “Shooting at Ellesmere College has attracted considerable success recently. There is a huge pool of talent in the school which is now showing itself in major competitions. At Appleton, there were 3 1st places, two 2nd places and four 3rd places, and some excellent shooting from new shooters competing outdoors for the first time’.