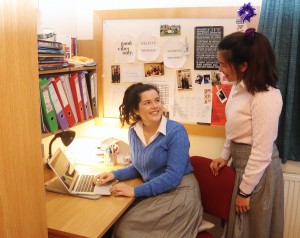 Ellesmere College is excited to announce that it is opening a second Sixth Form Girls boarding house in September 2019.

As the demand for Sixth Form places continues to grow at Ellesmere, the Governors and the Headmaster made the decision to repurpose one of the current buildings to allow for this expansion. The project will see the creation of a new additional Sixth Form Girls House - St Hilda's - and its first occupants will take up residence from September. Historically there has always been just one senior girls' boarding house and two senior boys' boarding houses, but this increase in demand for girls' places has driven the need for additional places.

This expansion will increase the capacity for girls into the Sixth Form by 26. Increasing capacity in line with demand is an obvious decision, but one which does allow for a wider choice of scholarships and financially assisted places.

The opening of a new boarding house is not just about adding extra beds; a key component part of the development will be to add further individual study areas for the day students, so that all Sixth Form pupils, be they day or boarding can continue to have a personal study space, a feature not usually offered in most Sixth Forms. Sixth Form pupils at Ellesmere College have the opportunity to study for A Level, the International Baccalaureate Diploma, or the BTEC in Sport.

Headmaster Brendan Wignall, said of the expansion, "There has always been an increase in demand for boarding places as students progress through Ellesmere, and the Sixth Form is a perfect time for many to take this step. Parents and pupils allay to the fact that this move towards a greater independence within a very safe, planned and secure environment allows for the personal and social development of the student, as well as the greater focus on academic success as everyone is working to the same outcomes."

"The flexible boarding options at Ellesmere, with weekly and full boarders, enables a clear choice for many parents," said Philip Wood, Head of Sixth Form. "For many Ellesmere parents, the value of having a study regime in place, as well as access to art, music, drama and sport, and a full and varied weekend activities programme under one roof, helps deliver all-rounded education that is the right preparation for life after Ellesmere."

It is testament to the opportunities and the overall breadth on offer at Ellesmere, that Sixth Form demand continues to grow. The continued success of our students is a key driver in this decision, as pupils are more aware than ever, that Universities and employers are looking for candidates with a breadth of experiences and not just a qualification. The pupils at Ellesmere are able to maximize the range of support both in and out of the classroom, have access to the extensive and award winning co-curricular programme and the proven international academic provision allows for high aspirations and pupil successes.

The additional new Sixth Form House will ensure many more pupils will have these opportunities for years to come.

To find out more about Ellesmere and the range of opportunities within the Sixth Form, please visit the website at: www.ellesmere.com or call the Registrar on: 01691 622321